Try it out on your free dummy site: Click here => https://demo.tastewp.com/import-users-from-csv-with-meta

Clean and easy-to-use import and export users and customer plugin, for WordPress and WooCommerce. It includes custom user meta to be included automatically from a CSV file and delimitation auto-detector. It also is able to send a mail to each user imported and all the meta data imported is ready to edit into user profile.

Moreover this plugin is compatible with many other plugins to be able to import and include them data, subscriptions, memberships, etc. Take a look:

If you have some problem or doubt:

In Codection we have more plugins, please take a look to them.

Once the plugin is installed you can use it. Go to Tools menu and there, there will be a section called Insert users from CSV. Just choose your CSV file and go!

You can generate CSV file with all users inside it, using a standar spreadsheet software like: Microsoft Excel, LibreOffice Calc, OpenOffice Calc or Gnumeric.

You have to create the file filled with information (or take it from another database) and you will only have to choose CSV file when you “Save as…” the file. As example, a CSV file is included with the plugin. 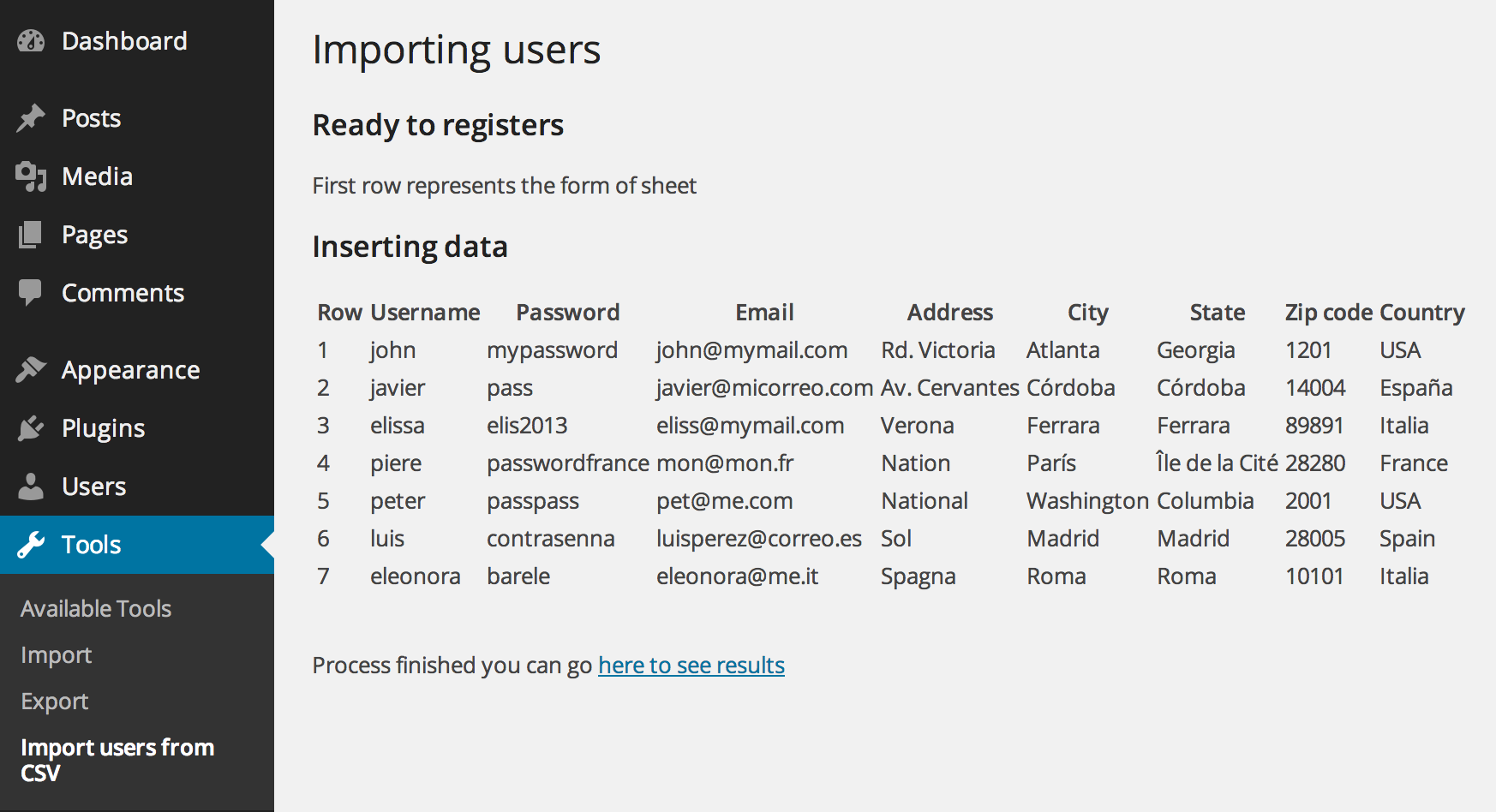 Now going through the points above, you should now see a new Import users from CSV menu item under Tool menu in the sidebar of the admin panel, see figure below of how it looks like.

If you get any error after following through the steps above please contact us through item support comments so we can get back to you with possible helps in installing the plugin and more.

p> and
tags in body of emails.

You should fill the first two columns with the next values: Username, Email.

The next columns are totally customizable and you can use whatever you want. All rows must contains same columns. User profile will be adapted to the kind of data you have selected. If you want to disable the extra profile information, please deactivate this plugin after make the import.

You can use a column called id in order to make inserts or updates of an user using the ID used by WordPress in the wp_users table. We have two different cases:

We can use a column called “Password” to manage a string that contains user passwords. We have different options for this case:

Plugin can import serialized data. You have to use the serialized string directly in the CSV cell in order the plugin will be able to understand it as an serialized data instead as any other string.

Plugin can import lists as an array. Use this separator: :: two colons, inside the cell in order to split the string in a list of items.

You can upload as many files as you want, but all must have the same columns. If you upload another file, the columns will change to the form of last file uploaded.

You can export a file with all your users data using “Export” tab. There you will be able to find some filters and options to prepare your export.

If you want to extend this plugin or use this plugin with any other, here you have a list with all hooks available in the plugin.

This plugin saved me a lot of time and work. Where can I donate?

Thanks, donations help us to continue improving our plugins and allow us to give the best support in the forums Donate Here via PayPal.

I’m not sure I will be able to import all users with correct data and roles. Will you do it for me?

Of course! In Codection we help you to import, migrate, synchronized, update or any other operation you will need to do with your users. Contact us at contacto@codection.com for more information.

Write us directly to contacto@codection.com.